Well, you have your photos. Whomever will want one, will also want a resume. Actors resumes are different from the usual business resume. There’s a standard format for them. You’ll see an example later. But for now, what do you do if you have little or no experience as an actor?
You have a few options. If you’ve never done any acting in your life, but you’ve taken some classes, you can simply state that fact on the resume in the format you see below. In the “THEATRE” section, you can list all the scenes from plays you did in your class, then list your training and special skills, and that’s about all you can add to the resume.

If you’ve done some high school and college plays, you can list those on the resume, then list your training and special skills.

If you’ve done some community theatre, you can list that, then list your training and special skills.

But, basically, if the above is all you have in the way of experience, it’s not really going to impress anyone in the professional arena very much. These days, most of the pros who audition for major roles in film, television and theatre already have impressive resumes behind them. There are lots and lots of us out there. So what do you do?

Well, everybody has to start somewhere. When I was starting out, I had three high school plays under my belt, and I did those as a favor for the Drama teacher at my high school, not because I wanted to be an actor. So… and brace yourselves for this… one of the early schools I trained at gave the following advice for beginning resumes:

Now, I have to tell you that (almost) every agent and casting director I have ever come across after 25 years in this business will warn the actor against lying on their resumes. They feel it’s just unethical. They will tell you that if you get caught at it, you will not be considered for any roles from them ever.

Unfortunately, they usually won’t even see you if you don’t appear to have some kind of experience. So this is what I did, and I’m not recommending it for anybody else, but I did it anyway.

I created a resume that was a total fabrication. I made up titles, parts, production companies and theatres for a whole résumés worth of credits. One thing I couldn’t lie about, of course, was belonging to any of the actor’s unions, because that is easily traceable. But transforming scenes I did in class into entire plays I did at fictional theatre companies in other parts of the country (so they were hard to trace), and making up film titles and parts I did with fictional film companies was easy for me. I just felt that since I am an actor anyway, and the basic job of the actor is to convince people that what you say and do is true, I was just testing my skills as an actor by fabricating my resume.

If you would ever choose this course of action, you have to be very, very specific about every detail on your resume. If you say you played Stanley Kowalski at the Looking Glass Playhouse in St. Louis, Missouri, you had better know the part of Stanley inside out, and you should also know exactly what the imaginary theatre looked like, where it was in St. Louis, who the director of the play was, what he/she looked like, how long it ran, what the reviewers said, etc., etc., etc. The clearer the picture in your mind, the more believable your resume when you are questioned about it, which does happen occasionally.

When I was in New York, I was auditioning for an Equity play, and using a resume that had part truth, part fiction on it. It turns out that one of the theatres I had made up actually existed, and the director of the play asked me some questions about it. I didn’t know the answers. That director smiled about it, and even though I never conceded I was lying, he knew.

So that’s about all I can tell you about the actor’s resume. Below, you’ll see an example of the format you should use when you are creating your resume. The elements should almost always be arranged in the order you see here, with Film first, and Special Skills at the bottom.

I hope this helps you in some way understand creating the actor’s resume.

Example Resume
To be able to view this sample resume on your Phone or Tablet I’ve included this smaller image. To see a  larger copy of this example resume for your laptop or desktop, click on the image to open a .PDF file in a new window. 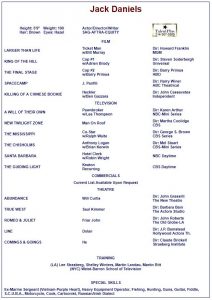